Welcome to the Sand Point Department of Public Safety!

The Sand Point Police Department is part of the City's Department of Public Safety (DPS), and is comprised of the DPS Manager
(or Chief of Police), two to four police officers, and the office administrator: 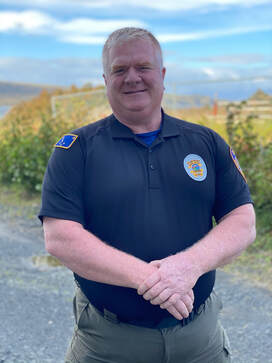 Chief Dave Anderson has worked as a patrol officer in Sand Point for the last three years and was appointed Chief of Police in August of 2020. Chief Anderson has over 35 years in law enforcement policing urban and rural areas. Chief Dave has an extensive background in narcotics interdiction and has worked in various schools throughout the course of his career. Most recently Dave has worked as the Sand Point School resource officer and is a member of the National School Resource Officers association. In February of 2020 Dave attended a two week course in Las Cruces, New Mexico and attained certification as a DARE officer with DARE America.

Chief Anderson enjoys working with the people of Sand Point and takes a personal interest in the success of the community. Chief Dave spends his off time in Eastern Washington State where he helps his family operate a small lavender and fresh cut flower farm.